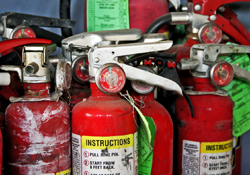 You owe it to yourself, your job and your family to know about the different classes of fire extinguishers so that you can react accordingly to extinguish a fire in an emergency situation. Take a moment and review these fire extinguisher classes:

When a fire breaks out, your first action should be to call the fire department. When the fire is small, take fast action with the right extinguisher to put it out or keep it contained. Fire extinguishers are effective only when fires are in their first stages. It is essential that they be immediately accessible and promptly used.