At least in the South, an oak is more than a tree; it’s more like a statue of a founding father. Trimming one is often an issue and removing one can be unthinkable. For some establishments and even whole cities, oak trees are an identity. From the campuses of Auburn and LSU to cities like Savannah and the majority of Louisiana, a live oak tree can trump economic development and keep real estate values at a premium. So, when the branches of one of the town’s oldest residents start to bounce on a power line, standard procedure can’t be taken. 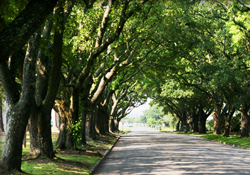 It’s these situations utility companies often dread. Circuits running through these neighborhoods are typically placed on a “trim as little as possible” list and maintenance is held off until desperate measures are called for. This is what is commonly known as a lose/lose battle, but it can easily be turned into a win/win.

For years, Edko has aided utilities and municipalities with this issue with the implementation of Tree Growth Regulator (TGR). Either used in tandem with trimming to prolong trim cycles or as a preventative measure to keep trees at or below clearance standards for a longer period than trimming alone, TGR has helped cut costs of maintenance programs as well as reduce complaints and heartache in sensitive areas on circuits.

Whether your problem is related to safety or aesthetics, TGR offers a solution. We’ve treated trees not only for the utility market, but also around government buildings and neighborhoods where older trees start to infiltrate residences and sidewalks. Our success in regulating an oak’s growth ranges anywhere from 4-6 years, and with some live oaks, even longer. So, instead of avoiding those sensitive situations, just put them on hold with Tree Growth Regulator.