Edko is pleased to announce the appointment of Jason Sellers as an Edko Vice President effective 2013. Over the past 7 years, Jason has served Edko as the District Manager serving Florida, Georgia and Alabama. Jason has grown that office to become a top performing district within our company. His district provides mostly TGR Application Services, Contract Utility Forestry Personnel, ROW and Bare Ground Herbicide Applications, and Vine Patrol and Treat services to Investor Owned, Municipal, and Cooperative Utilities across the deep southeast. 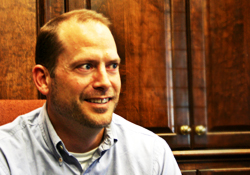 Jason graduated from Presbyterian College in 1995 with a Bachelors degree in Biology and received a Master’s of Science in Forestry Degree from Stephen F. Austin State University in 1998. His knowledge of the vegetation management industry, efficiency in operations, and his excellence in customer service have been vital contributions to this organization.

Jason will be relocating to Shreveport, LA in June of 2013 with his wife and two children. Jason will continue to serve Edko in the states where he started his career while also expanding his influence into the western operations of Edko. Please join us in congratulating Jason in this new position and the best of luck in his family’s transition to North Louisiana.