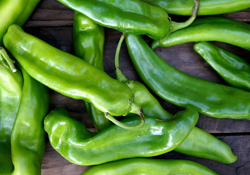 During September and October, this recipe is a staple in our house. Even if your football team is tanking in the 3rd quarter, this stew still tastes awesome.

Mix sour cream with lime juice and lime zest and place in the fridge.

Remove papery husks from tomatillos and rinse well. Cut in half and place cut side down, along with 5 unpeeled garlic cloves and anaheim chiles on a foil-lined baking sheet. Place under a broiler for about 5-7 minutes to lightly blacken the skin. Remove from oven, let cool enough to handle. Deseed and skin anaheims.

Place tomatillos into blender with anaheims and pumpkin seeds. Remove the now roasted garlic cloves from their skins, add them to the blender. Add chopped serranos and cilantro to the blender. Pulse until all ingredients are finely chopped.

Season the pork cubes generously with salt and pepper. Heat olive oil in a large, heavy-bottomed skillet over medium high heat and brown pork chunks well on all sides. Work in batches so that the pork is not crowded in the pan and has a better chance to brown well. Using a slotted spoon or tongs, lift pork out of pan and place in bowl, set aside.

Pour off excess fat, anything beyond a tablespoon, and place the onions and garlic in the same skillet and cook, stirring occasionally until limp, about 5 minutes. If your skillet is large enough to cook the entire batch of chile verde, with the sauce and meat, then add the pork back to the pan. If not, get a large soup pot and add the onion mixture and the pork to it. Add the oregano to the pan. Add the tomatillo chile verde sauce to the pork and onions. Add the chicken stock (enough to cover the meat). Add a pinch of ground cloves. Add a little salt and pepper. (Not too much as the chile verde will continue to cook down and concentrate a bit.)

Bring to a boil and reduce to a slight simmer. Stir occasionally to prevent sticking. Cook for 2-3 hours uncovered or until the pork is fork tender.

Adjust the seasoning to taste with salt and pepper. Serve with warm corn tortillas and lime sour cream.