One day it’s 2 foot long and doesn’t seem to be an immediate concern and 2 weeks later it’s 22 feet long and bearing weight on a power line. We’re talking about vines. Vines are not only an unsightly nuisance that threaten service reliability, but they also create fire and pest hazards. 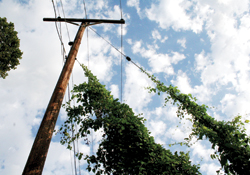 Vines are truly in a league of their own when it comes to growth rate. The reason for this is because a vine doesn’t require its own structuring. Instead it relies on other objects, such as buildings, trees and utility distribution poles. You could simply trim the vine and remove it, but in a few weeks it’ll be back and thicker than the first time.

A simple cut combined with a basal application gets rid of this fast-growing invasive plant at its source, since our herbicide translocates to the root system. You’ll not only improve service reliability for customers but also the aesthetics of your structures. Use our contact page to drop us a line before vines have a chance to drop a line for you.