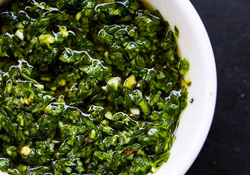 Invented by gauchos in Argentina, chimichurri is a simple marinade and sauce that enhances the flavor of beef instead of covering it up. I’ve made steaks using chimichurri twice, and both times I’ve heard the “this is the best steak I’ve ever eaten” comment. It’s that good.

Bring the water to a boil in a small saucepan. Add the salt, and stir until it dissolves. Remove from heat, and allow to cool. Mince the garlic very finely, and put in a medium bowl. (1) Mince the parsley and oregano, and add to the garlic, along with the red-pepper flakes. (2) Whisk in the red-wine vinegar, then the olive oil. Whisk in the salted water. (3) Transfer to a jar with a tight-fitting lid, and keep in the refrigerator. Let the flavors mingle for at least a day. (4) Marinate meats for 1-2 hours and serve some fresh chimichurri alongside the meat when serving. The sauce can be kept refrigerated for up to 3 weeks.